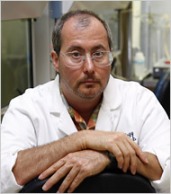 M.D., Ph.D., Chair of the Neurobiology department at the Stanford University School of Medicine, Barres went through imost of his medical schooling as a woman.  He has written extensively about his personal experiences as being treated differently as a male scientist versus a female scientist.  For an interesting article in the New York Time click here

ST identifies as non-binary and still has not found the perfect set of pronouns. ST told us about their current PhD research, which focuses on developing methods of simulating molecules on computers. ST said that it was their Grandfather that influenced them in their developing interest in physics.  Their grandfather was a physicist himself and often would carry out experiments with his grandchildren, which ST felt really inspired by.

Lynn Conway is a famed pioneer of microelectronics chip design. Her innovations during the 1970’s at the Xerox Palo Alto Research Center (PARC) have impacted chip design worldwide. Many high-tech companies and computing methods have foundations in her work. 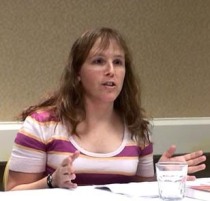 Julia Serano is a biologist. She lives in California and wrote Whipping Girl: A Transsexual Woman on Sexism and the Scapegoating of Feminity. She works at UC Berkeley in the areas of evolutionary and developmental biology. She earned her doctorate in Biochemistry and Molecular Biophysics from Columbia University.

M* does not wish to be identified as he lives a stealth life and is not ‘out’ as trans in his working environment.   He attended our trans youth workshop.  He originally pursued an academic career in the humanities.  Following this, he studied physics part-time by distance learning, while transitioning, and received a second undergraduate degree.  He went on to study for a PhD in Astronomy.

Sarah Gibson is an engineering student at the university of Cambridge and identifies as trans*. She is also one of the 2013-2014 CUSU LGBT+ trans* reps. Prior to attending university she has worked as a software engineer for Cambridge Consultants through the Year in Industry scheme. Outside of engineering, she is an equal rights activist, specialising in trans* rights. More of her work can be found at http://crazylaughingsarah.wordpress.com. She attended our trans youth workshop and panel event.

Sophie Wilson is a British computer scientist who is known for designing the Acorn Micro-Computer, the first computer sold by Acorn Computers. She also designed the instruction set of the very well known, ARM processor. She went to Cambridge University and in 2011, she was interviewed by Maximum PC magazine as the number 8 (of of 15) most important woman in tech history. 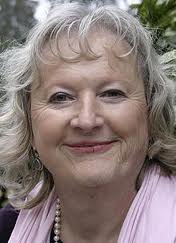 Christa Muth is a systems scientist, mangement professor, and management consultant from Germany. She created the field of ”Human Systems Engineering.” She transitioned when she was 56 in 6 months time with the support of her employer, students, and colleagues.

Dr Karl Rutlidge is currently 29 years old and is in the early stages of gender reassignment from female to male.  He attended our trans youth workshop.  He has a physics PhD and has been living as a man for about a year. Reflecting a bit on his time as a PhD student, which was before he came out as trans, he claims “it certainly seemed to be male-dominated. I shared an office with nine guys and a trans woman (who was really supportive). There were very few female academic members of staff. I don’t think there was an assumption that physics and maths are male pursuits on the whole, and the department made the right noises about inclusion and diversity, but I did encounter casual sexism regularly. Now I think about it, it’s not that different to how things can be in other working sectors, such as the bank where I now work!” Interestingly he chose to leave the world of physics due to his transitional process. It was discussed that the world of academia and science is very competitive and often post doctorates are short-term, which makes it difficult to go through a process that ideally requires one to stay in one location for a number of years. 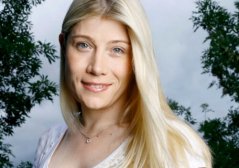 Kate Craig-Wood is a British IT entrepreneur and the co-founder and managing director of Memset Dedicated Hosting. She works on energy efficiency and is a woman’s activist in the IT field.

Angela Clayton is a British physicist. She is also a trans activist and in 2002 became the first “trans observer” to the UK Trades Union Congress LGBT Committee.

Karen Fields teaches GCSE Physics and has been Head of Science in a secondary school for about 20 years.   She attended our trans youth workshop.  She trained in Biology then took a second degree in Chem, Physics and Geology with the Open University in order to facilitate promotion.  She said that originally she wanted to become a vet and didn’t pick up physics until later on in her life due to gender biases around physics.  She loves teaching physics in school especially showing her students how the experiments work as they tend to find that most interesting.  She teaches in a very different style to most teachers and has a passion for her craft and seems to do rather well at it.  She claims “I am not an expert in Physics and my Maths is appalling but I do generate enthusiasm for the subject”.  Karen has moved the A level classes in her school from the normal 4 or 5 students to the teens.  She has also been known to take over the running of whole school year groups for Science days!